To enhance cultural exchange between Japan, Hong Kong and Macau, the Consulate-General of Japan in Hong Kong is organising a webinar next month and has invited as guest speaker Mr SUEMITSU Kenichi, a renowned Japanese theatre artist, in order to share his creative experiences. 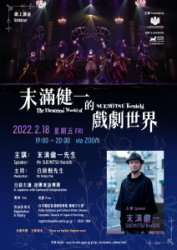 (Click on the image to download the event poster.)
At a time when the pandemic is making travel difficult between Japan, Hong Kong and Macau, we hope that this event will help both the industry and the general public gain a better understanding of Japanese cultural industries. A Q&A session will be held at the event, where participants can either provide questions in advance or ask questions on the spot for Mr SUEMITSU to answer. Mr SUEMITSU Kenichi is an all-round theatre practitioner who works in a variety of stage and theatre-related roles, such as playwright, scriptwriter, stage director and actor. His life work, original stage play series TRUMP, has expanded to include theatre performances, novels and events and its manga is currently being serialised in KADOKAWA's Young Ace magazine. He has also written and directed the 2.5 dimensional stage plays Stage Play Touken Ranbu, Stage Play Demon Slayer: Kimetsu no Yaiba, and was the series composer and screenwriter for the TV animation Welcome to the Ballroom, of which Stage Play Touken Ranbu was simulcast in Hong Kong cinemas. Currently, his original two-hander Equal is being performed in Daehangno, Seoul, Korea.